Should you buy a brass-framed revolver?

Without fail, every couple of weeks someone posts on a forum or on facebook, "Hey, I just found this great deal on a brass-framed revolver!  Should I buy it?"

The very first question you need to answer for yourself is, "Do I care about historical accuracy?"  If so, most of the commercially-available brass-framed reproduction revolvers are not based on historical examples.  This includes the brass-framed reproduction 1851 "Navy" and the Remington "New Model Army" (1858).  Additionally, the brass-framed reproduction 1851 Navy is often offered in .44 caliber, which is not even a correct caliber for the Navy revolver, which was .36.  During the Civil war, the firm of Schneider and Glassick of Memphis, TN, produced perhaps some 50 copies of the Colt 1851 Navy, though some of the extant copies have brass frames but iron trigger guards and backstraps.  And the cylinders were smooth-sided with no naval battle scene engraving and no step-down in diameter towards the rear.  There are no reproductions of this revolver available.  There are, or were, a few reasonable reproductions of historical brass-framed revolvers made.  There have been runs of the Confederate Griswold & Gunnison made by various manufacturers, and likewise Pietta as of today makes a copy of the Spiller and Burr.

So if you want a historically-accurate brass-framed revolver, about your only commercially-available reproduction option today is the Pietta Spiller and Burr.  Lodgewood Manufacturing offers a copy of the Griswold & Gunnison from time to time.

I'll note here that none of the brass-framed guns use the period-correct style of "red brass" or "gunmetal brass" that was used during the Civil War, but that's a small detail that most folks are willing to overlook.

Pietta Spiller and Burr, from the Pietta web site.
The second question you want to ask yourself is, "Do I want to shoot "full-house" loads?  One common trait of Civil-War era revolvers is that the cylinder rotates on an axle called an "arbor".  Not only is it free to rotate about the arbor, but it is also free to slide back and forth along the arbor, being trapped between the barrel at the front of the cylinder and the frame at the back of the cylinder.  When the revolver is fired, the cylinder rockets backwards under recoil until it strikes the face of the frame.  Essentially, the cylinder acts like a hammer, battering the rear of the frame.  With a brass-framed revolver, the hard steel cylinder can literally dent the brass frame.  This is called "peening".  When this happens, the cylinder now has more room to move back and forth on the arbor as it settles into the dents it made in the frame face.  This means there is increased clearance between the face of the cylinder and the barrel opening.  People have seen this gap and made the claim that the brass frame is "stretching".  This is false.  The frame is not stretching, but rather it is getting dents beaten into it that the cylinder can now rest in. 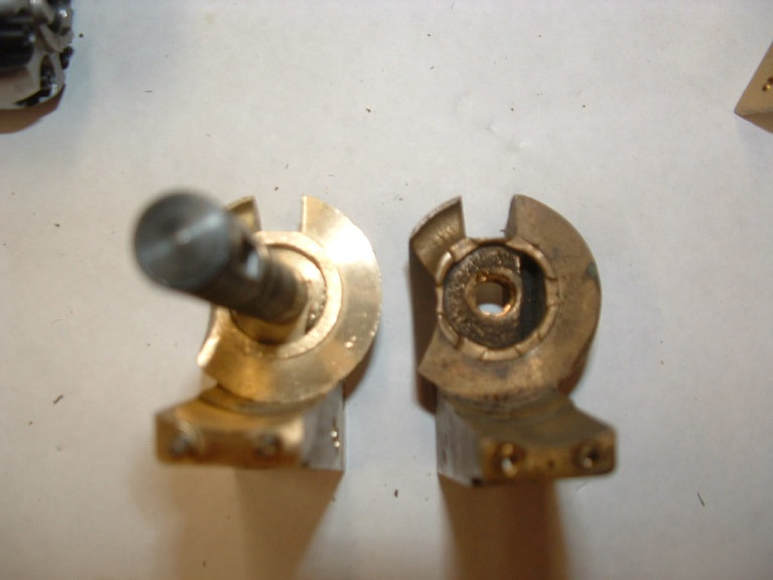 Peening.  Note the dents hammered into the race on the brass frame by the hard steel cylinder under recoil.
In truth, if you are interested in target accuracy, you will almost always find that revolvers don't achieve maximum accuracy at maximum load, anyway.  For .36 caliber pistols, about 12 grains of 3F does the trick, and with most .44 caliber pistols (Except the Walker), about 18 grains of 3F does the trick.  My Walker likes 45 grains of 3F, which, while a reduced load for the Walker, is still an impressive charge, equivalent to what I shoot in my Carbine!

Anyway, if you are set on shooting a brass-framed revolver, then the key to long life is shooting reduced loads so as to minimize the beating that the frame will take from the cylinder.

In the end, buy what you can afford and what you like - it's your money, after all.  But many folks are drawn to the era of these percussion revolvers to experience what it was like to shoot these historical firearms.  If historical accuracy matters to you, your options are limited for a brass-framed percussion revolver.  But historical or not, they are fun to shoot and will last a lifetime if you treat them with a little care.